If you happen to have had a debate with someone who acts like he is an expert on something, at some point, they might have thrown this diagram on your face in order to shut you off. 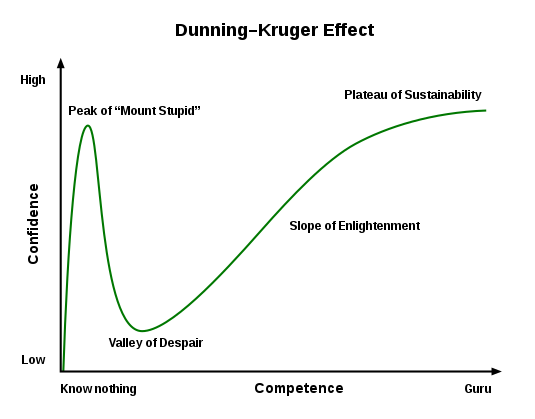 At face value this diagram demonstrates that the less you know about something, the more confident you appear to be in that given subject. The “experts” that supposedly understand a topic believe that anyone who graduates with a higher degree from a given university, is somewhere between the ‘slope of Enlightenment’ and the ‘Plateau of sustainability’ while you, the average Joe, lingers somewhere along ‘Mountain Stupid’.

Fundamental Flaws and A Brief Background

The problem is, as with all psychological studies, this is not what the actual research demonstrates. Not even close. The even greater issue is that if we observe the real world, we can easily come to a realization that most “experts” do not really learn or become competent on their subject matter. They just happened to go to school for it, forgot most if not all aspects of what they studied, and then happened to be employed in something similar to what they studied (if they are lucky enough). Why? Well because we have been programmed from a young age to believe that school = education = expertise.

There are countless examples of people with no MBA to be able to run successful businesses. Priests that understand the human psyche better than a PhD graduate in psychological therapy. Sociologists that know less about "society" compared to a village mayor in the middle of nowhere. Writers that never took a course in English Literature. Professional athletes trained from other athletes that never studied "sports science". Teachers like Sal Khan from 'Khan Academy' that never took a teaching course in the life. Our world is filled with everyday people examples that understand the world much better than someone who went to school for it.

Perhaps the only exceptions were expertise truly shines is in the fields of Engineering, Surgery, Piloting, Physics, Biology and Chemistry and the like. And in these subjects, no ordinary person claims to be a professional or even mediocre about it. And I dare to you to test this with random questions from people in the streets.

And this is exactly why the experiment is poorly designed. Even If someone claims to understand aspects of life that relate to economics, sports, teaching, psychology, sociology and (even medicine in some cases) is simply because the best school for these subjects is life. These fields are not scientific. They are descriptive. In the case of Medicine has mostly to do with Art rather than Medicine. Surely Medicine uses hard sciences as foundation but upon application, the doctor relies on models and experience rather than his hard science foundation.

The above fields claim to be doing the rigorous scientific processes but they do not derive their understanding into any laws. This is something even Richard Feynman noted in one of his interviews. All these fields have is generic observations. Sooner or later the average Joe, will also come to similar conclusions. There is no "real value" when applied to the chaotic world. Any statistical significance vanishes and thus this is why social fields can be faked by almost anyone. This is also why you see people from many of these social fields rushing to secure their sector from “crooks”. They are not any better. They just wasted a huge amount of money to be more or less like the rest. The Dunning Kruger effect is reversed on them. It turns out that they think they are experts because they study these subjects more but in reality the average Joe was attending a different school with them all along. The one of real life.

These fields are surrounded by abstract models on human behaviour, something that anyone can stumble upon by opening a simple business, door to door salesman or getting elected as a politician. If anything, these people become even better than someone who studied a social science field in a foreign country. Even experts will admit that social sciences can only make sense if you localize. For example, “People that get exposed to the sun feel better”. Now compare it to “Senior adults in the village of a Mediterranean island, with no previous medical history and a family surrounding them, tend to feel marginally better when exposed to 2 hours of sunshine in the morning hours with a clear sky”. Thing is, most social studies are unable to make such claims because most of their studies fail to replicate to this exact level. Thus they end up generic as the bullshit flashy titles you see everyday shared in social media.

What the Study Actually Says

The study also received plenty of criticisms throughout the years because, like all social studies, it suffers from the same poorly designed flaws. A few of them are (a) regression to the mean , (b) inability to explain the asymmetry in the bottom quartile in comparison with the top quartile and last but not least (c) the actual task being performed. I won’t go into these because it will deviate from the main point of this essay.

The experiment never showed that incompetent people appear to be more knowledgeable and confident that people who claim to be experts but it showed that they merely overestimate their own abilities. And a diagram in the actual study is pretty clear about it;

At no point does it show that everyday people think they know more than the experts. Whoever came up with this conclusion and whoever actually propagated and believed it doesn’t know how to read even a simple chart. I personally think they haven’t even read the actual study. And this is a perfect example how the “experts” are merely sharing a meme, without doing their due diligence. How they are much like those they accuse. Reading their news feed and repeating information. And this is exactly how we are all very similar in our biases.

And this brings us to my final point. Humanity did not progress from minds that were too cautious and humble to play and discover things. Most things happened with people "playing with fire" without having a proper understanding how something works. Through trial and failure we learned things. Not through safe-space research and relying on the "experts".

If only the "experts" dared to learn new things and make breakthroughs we would still be monkeys throwing shit at each other. Dunning-Kruger, at best, ignoring all the flaws of the study, only demonstrates that there is an innate desire to push forward even at the risk of failure. This is all that there is too it. And we don't need "a study" to understand this.